Despite the COVID-19 outbreak, we're 100% operational. We have instructed all our employees to work remotely in order to ensure their safety and well-being. 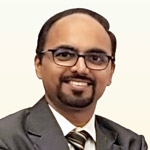 Yusuf Gandhi is an IT Professional working as a Sr. Manager at Silver Touch Technologies. He has 18 years of experience in the field of Web Development and related Technologies. He is Managing Development, UI/UX team, Pre-Sales, Ministry/Govt. Departments Projects and dealing with various State Governments and Corporates. He is always working towards making organization more profitable and successful by implementing various innovative ideas and techniques. He has problem-solving skills and coordination abilities among different clients, stakeholders & team members. Furthermore he is Inventive, Photo Enthusiast, Nature Lover, Foodie and Gadgets Geek.

Do you want to connect with us?